On December 17, 2020, the Universidad Católica Sports Club presented the new image of its stadium with a video that was reported by all the sports media and various general information media in Chile. The launch was attended by the President of Cruzados (a public limited company that manages the Football Branch of the club) Juan Tagle, the General Manager, Juan Pablo Pareja, the President of the Sports Club, José Manuel Vélez, and Hernán De Solminihac, President of the Commission Stadium, in charge of launcing the competition and reviewing the proposals of the nine studios that were presented, as well as César Azcárate, IDOM’s director of sports projects and architect in charge of the project.

Juan Tagle, President of Cruzados, pointed out what this important step means for the club: “this is a day of strong emotions for the crusaders. For the first time, we are presenting images of the dream of our new home. For those of us who feel deeply for this club, today is a very special day. A historic day, one of those that will be etched in everyone’s memory.”

The Universidad Católica Sports Club, founded in 1937, inaugurated its current stadium in 1988, known as the San Carlos de Apoquindo Stadium. With this renovation, the management team of Cruzado intends to modernize the Stadium and its surroundings, making it a multipurpose venue, which will be an architectural landmark for the town of Las Condes and the city of Santiago, providing value and services to the Community, the perfect place to organize high-level sporting events, while generating new income.

“The new stadium will be a quality architectural icon for the community, visible from the environment and respectful of it, inspired by the traditional materials of Chilean architecture while looking to the future of football in the country,” says César Azcárate.

The construction works are scheduled to begin during the first half of 2022 and end in the second half of 2023, allowing the new venue to host some sports events of the Pan American Games to be held in Santiago in October of that year.

Presentation of the stadium by César Azcárate

Click here to see the video of the project 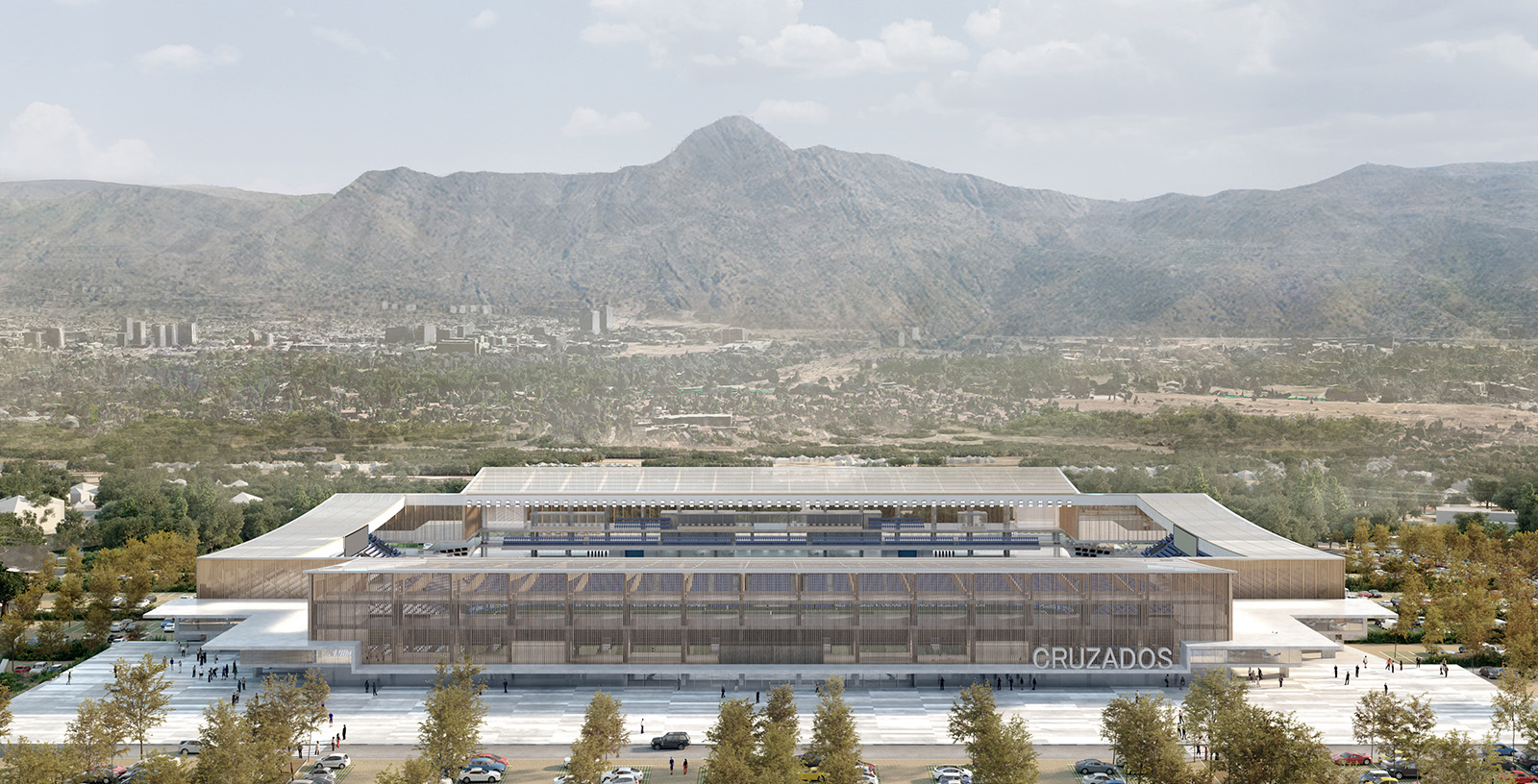 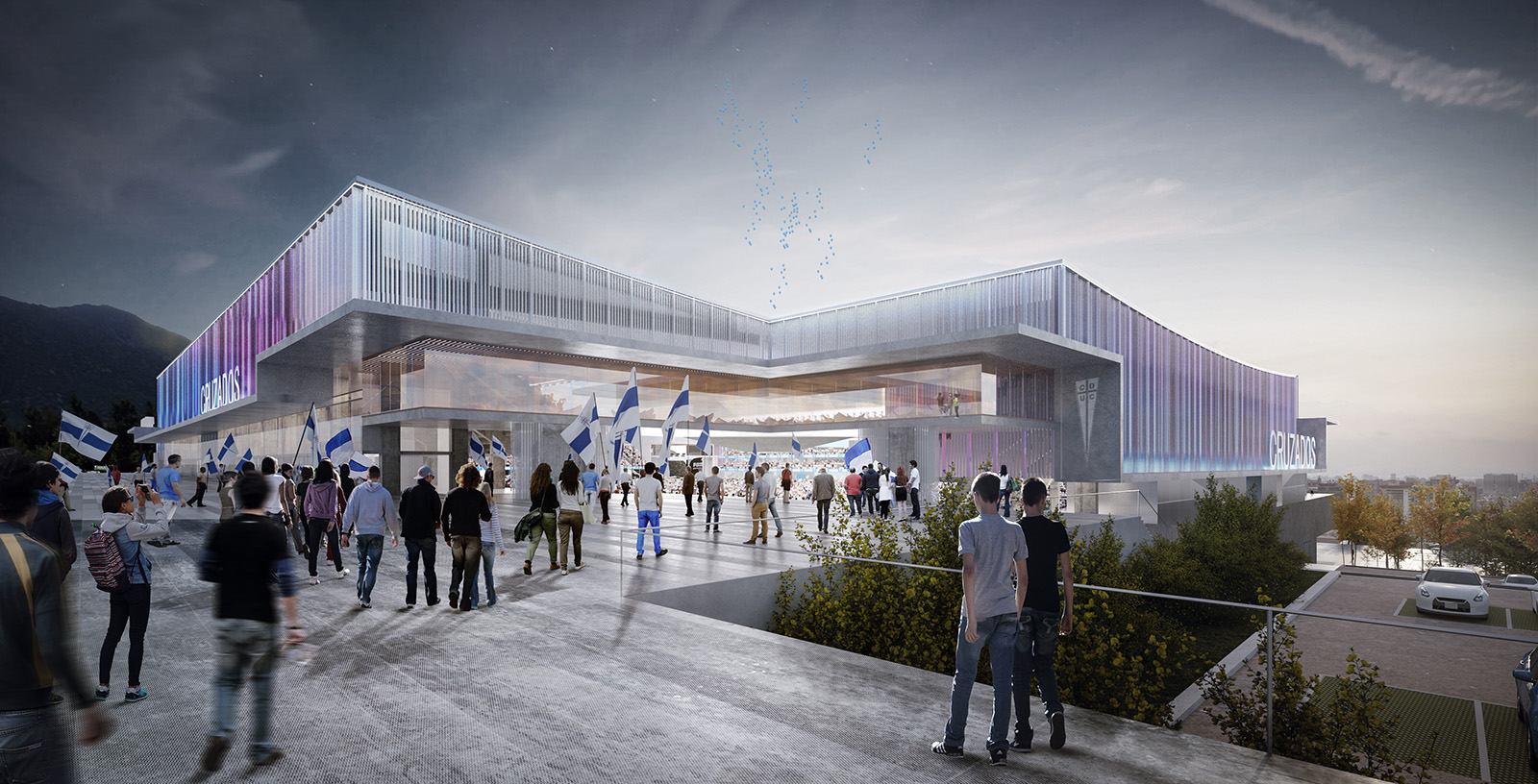 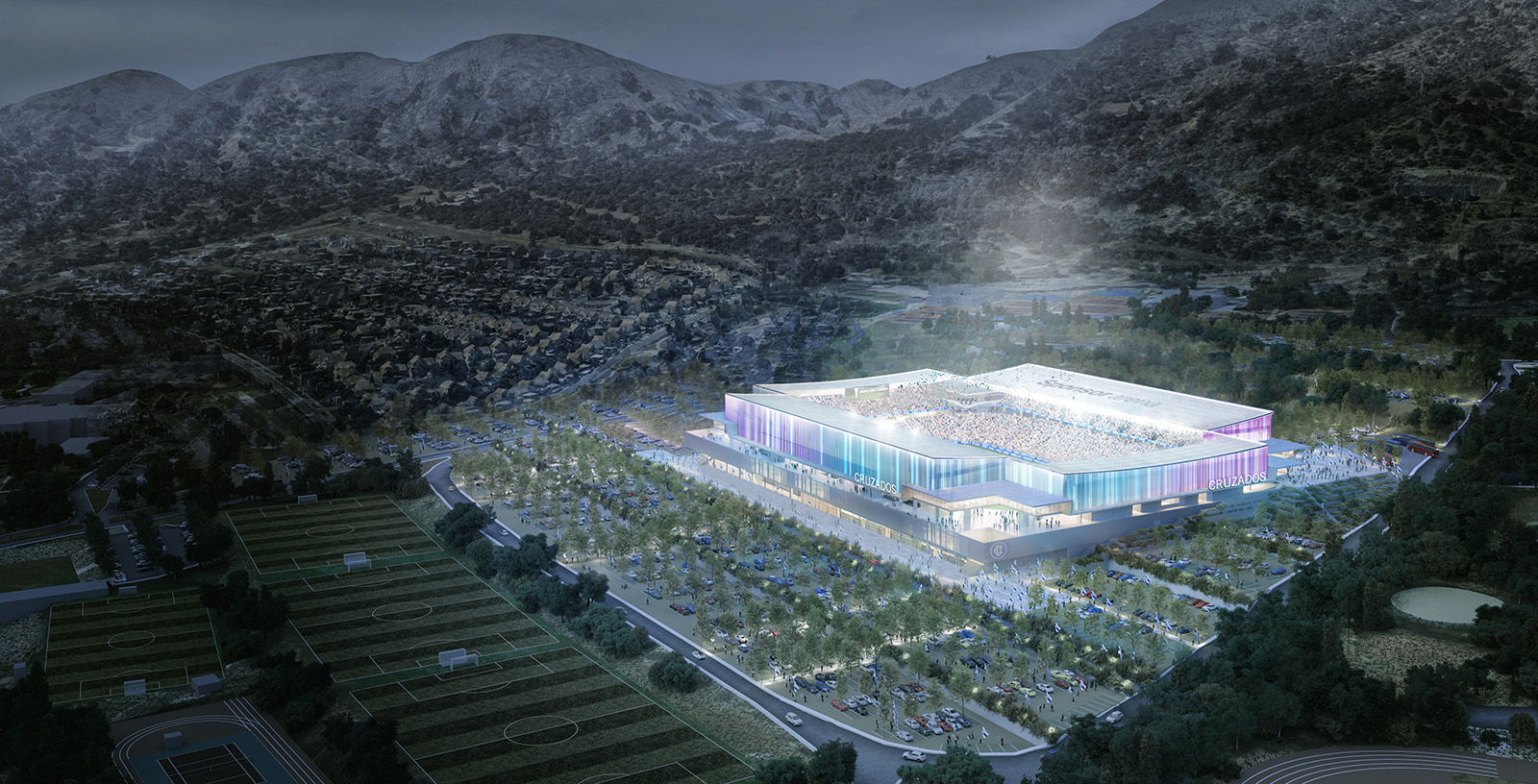 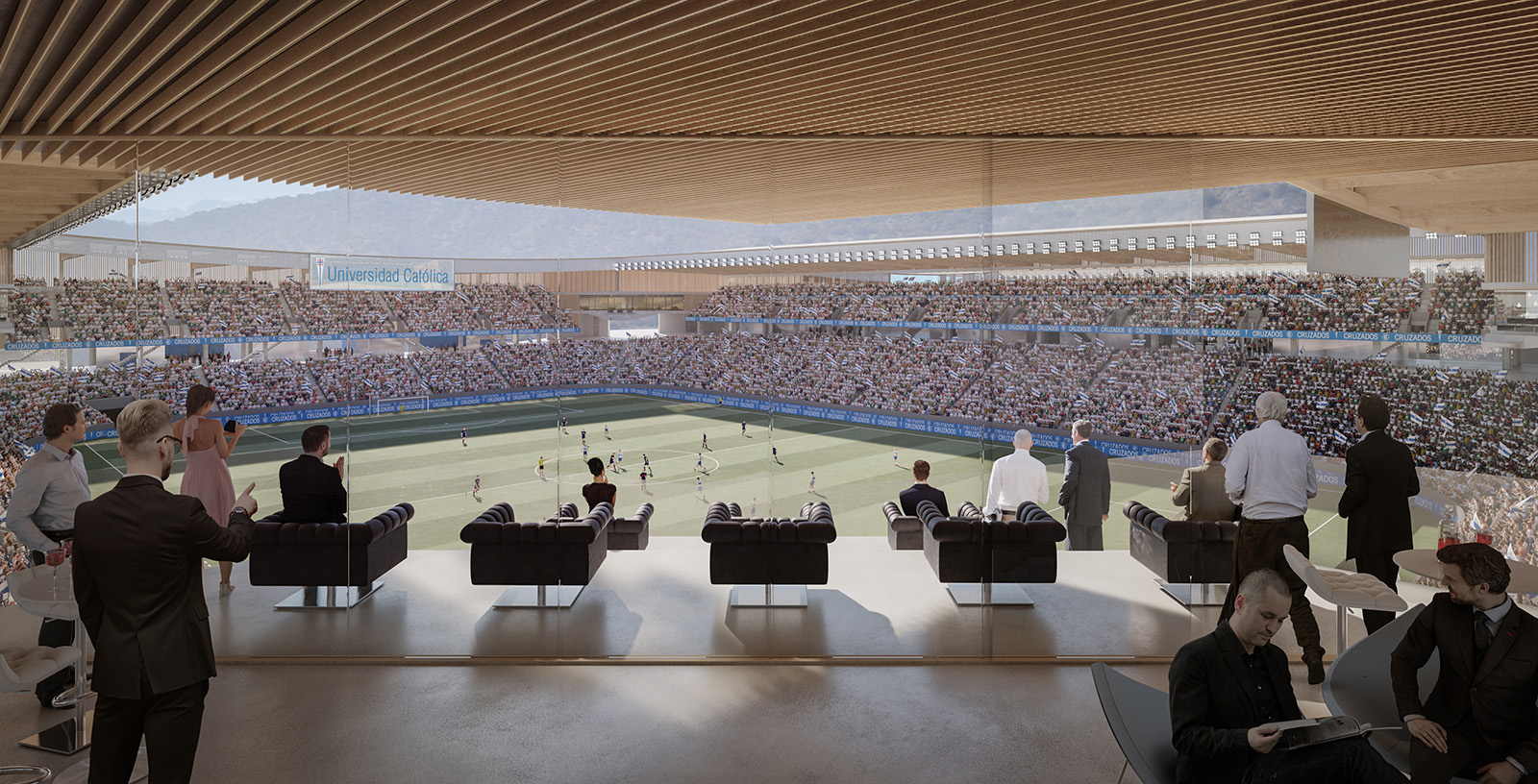 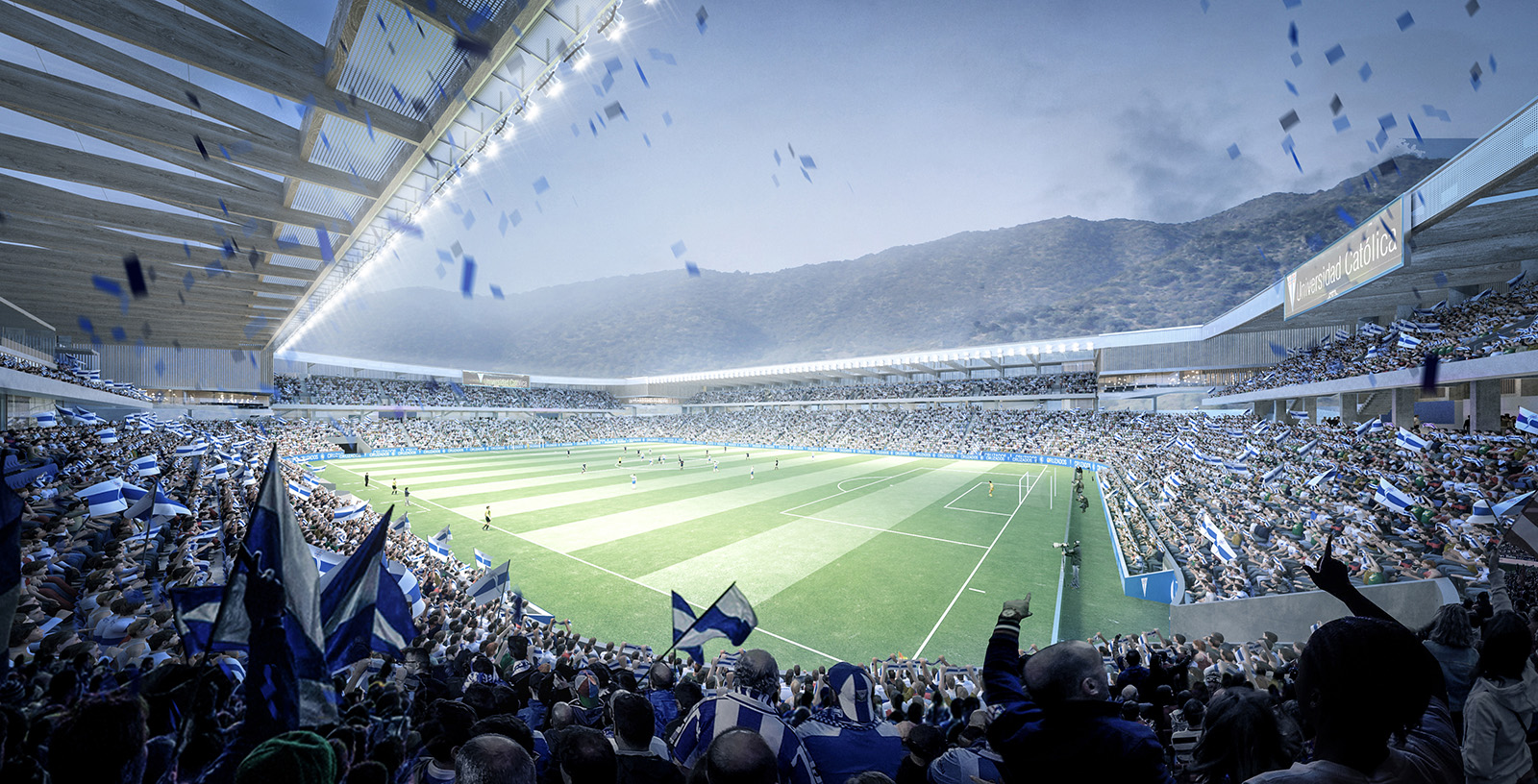 From an architectural perspective, the project is conceived in section due to its location at the foot of the Cordillera, on a slight slope and looking towards the city of Santiago. For this, a main building is configured, which is shown towards the city and which houses a large part of the hospitality uses.

Starting from the current Stadium, anchored to the ground as if it were a Greek amphitheater, the new needs, the new uses and the increase in capacity, from 14,000 to 20,000 spectators, generates a volume that is perceived as unitary, light and elevated with respect to what exists. In this sense, the use of wood as the main element in the façade and the roof structure allows dialogue to be established between the tectonic and the light, while also being a sustainable resource, in line with the whole approach to the modernization of the Stadium.

A continuous boulevard is designed that allows access to all the upper part of the lower stands and that represents the line that separates what is linked to the ground from what is elevated. The new volumetric configuration will allow the stadium to go from being open to being closed covering the stands, generating a better football atmosphere, better acoustics and greater comfort for spectators. The stadium will also be 7/365, economically sustainable and with a wide range of hospitality activities.

<< Success Stories in Project ManagementPromoting renewable fuels >>
Manage Cookie Consent
To provide the best experiences, we use technologies like cookies to store and/or access device information. Consenting to these technologies will allow us to process data such as browsing behavior or unique IDs on this site. Not consenting or withdrawing consent, may adversely affect certain features and functions.
Manage options Manage services Manage vendors Read more about these purposes
Preferences
{title} {title} {title}